My Grandfather opened one of the first Electronic and Telephone companies in Southwestern Washington in 1908 in his hometown of Camas. The Company did phone line and equipment installation. That was the era when phones had no buttons – just a heavy earpiece, microphone and lever to tap to get an operator. 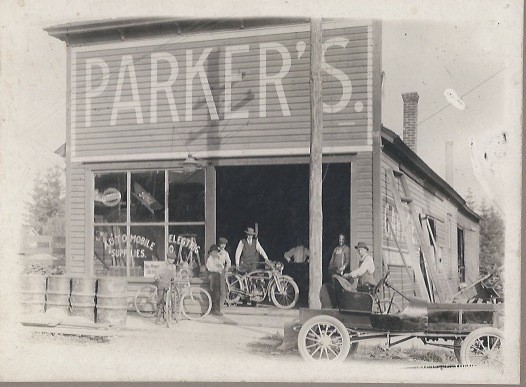 He sold the company too early.

The good news was he went on to open the first Ford Agency, Garage and Livery Service in Southwestern Washington in 1911.  He was a visionary, the first Model T had only rolled off the assembly line in 1908.  That’s him in the photo with what looks like an Indian motorcycle. Customers were going to need mechanical repairs and parts. But, he sold that business too early as well, before he ever realized the potential of the business.

My Father, by comparison, worked for the same company his entire career and never took a great deal of risks in business. When he finally retired, he became a Real Estate Broker where he excelled in being his own boss and running his own business.

When I launched my first company in 1997, I don’t think my Father was surprised. He watched my rises and falls – like almost every startup. Big dreams followed by both successes and setbacks. Though he couldn’t relate personally to my experience, it was clear that he could relate. He hadn’t done it personally, but he had seen it first person.

I often wonder what my grandfather would have thought of me becoming an entrepreneur. I would like to have asked him any number of questions:

In some ways, I inadvertently followed in his footsteps – my first startup was early to market, arguably before its time. We started doing software license delivery with the goal of electronic license delivery in 1999 – when people were barely able to do a software download, let alone do it for the enterprise. Today, it seems like a no brainer, but at the time, it was a difficult concept for people to grasp.

My Grandfather finished his business career in his 70s, owning and managing a local neighborhood grocery store. I never had a chance to meet him; he died before I was born. I still have one of his vintage 1908 phones on my desk. It’s a great reminder of the technological changes, risks, and rewards, but mostly, it’s about the men who went before me and put me on the path I’m on today.

And it makes me wonder if any of my children will follow in my footsteps – or if it will skip a generation. Somehow, all of the research and data about children of entrepreneurs becoming entrepreneurs doesn’t seem as relevant when you’re talking about your own kids. At that point, the data becomes personal. It becomes about their dreams and goals – not about stats. I’ll continue to encourage them to make a positive impact on the world their own way with their own gifts.