By:   Dave Parker Startup NEXT Comments:   No Comments 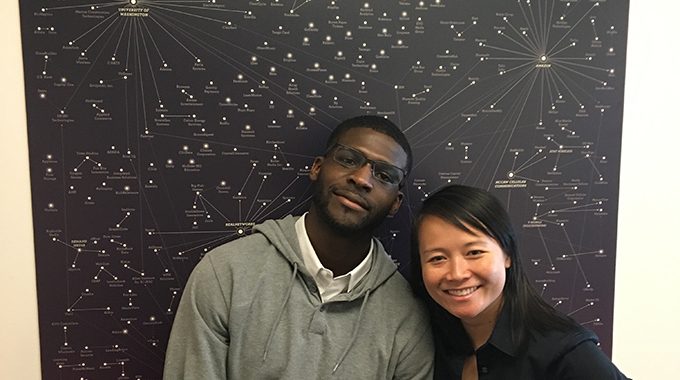 A friend of mine, Rodney Sampson, a partner at TechSquare Labs, made a statement at an event I recently attended that has stuck with me: “Diversity gets us a seat at the table. Inclusion gets us a voice in the dinner conversation. Equity gets us our fair share.”

The lack of diversity in the tech industry has been a widely covered issue for years now. For the first time ever, Seattle Startup Week (Nov 14-18) is having a Diversity and Inclusion category, or “track.” Julie Pham, head of community engagement and marketing at WTIA, and Andrew McGee, executive director of the Greater Foundation, are the track co-captains. Julie started designing the track in late August and came up with the idea to hold a series of “Real Talks,” candid conversations about race and gender issues in tech. She realized she needed a co-captain and after I introduced her to Andrew, they hit it off and partnered up.

On the surface, Julie and Andrew may seem like an unlikely pair. Julie is a Vietnamese-born American Gen X-er who grew up in Seattle. Before working in the tech industry, she earned her PhD in history at Cambridge University and ran her family’s Vietnamese newspaper. Andrew is an African American, Mississippi-born millennial. Before moving to Seattle less than a year ago to run the Greater Foundation, he earned a graduate degree in instructional communications, served as a Christian chaplain, and worked an assistant football coach. Julie and Andrew bring totally different perspectives to this program, but that’s part of the beauty of their partnership. In each Real Talk session description, they include a co-written disclaimer reminding participants that they need to be willing to feel uncomfortable to learn.

Below is a conversation about how they developed the Diversity and Inclusion track, why they’re passionate about this work, and what they hope to achieve.

Andrew McGee (AM): So, why did you decide to design this track as a series of Real Talks?

Julie Pham (JP): I am so bored of listening to panels with corporate heads of Diversity and Inclusion talking about the need for diversity and inclusion, but nothing really happens. I wanted to move away from generalities to sharing specific life experiences so that we can understand where we’re coming from.

AM: I agree. I’ve only been in Seattle for a very short period of time and I’ve become weary of the checking-the-box and quick-fix mentality that seems to have everyone in the tech industry saying the same things and beating a dead horse. There are too many politically correct answers to this solution and not enough reality, truth, and shared stories of the individuals affected by underrepresentation in tech.

JP: What do you think about the culture here? Being essentially a native Seattleite, I think we’re culturally very passive and extremely liberal, and people are often apologetic about talking about differences because to talk about differences seems…impolite.

AM: I can definitely see the liberal and passive culture that reinforces political correctness. I also see a very diverse population from downtown to south Seattle. With the tech industry not reflecting the richness of Seattle’s diversity, I believe we have a real opportunity to be the city that is seen as an example of how to successfully foster equity, diversity, and inclusion in tech. As innovative and progressive as Seattle is, all that’s needed is real passion and intention with this topic. What surprises me the most is that there are too many of us unfamiliar with the minority community right down the street from downtown. I’m guilty of that, too. My office is at Galvanize in Pioneer Square and I had never spent time in the International District, which is only five blocks away, until we started working together. It’s on us to change that.

JP: Developing this series of Real Talks together has been a good exercise of that open dialogue that needs to happen. I originally wanted to have a panel discussion called “Real Talk: White Guys Talk about Privilege in Tech” to illustrate that white guys in tech don’t constitute a monolithic block of thinking and there’s a range of opinions.

AM: Yes, and when I first saw your proposal, I just didn’t think having an all-white panel discussing their privilege would be very encouraging to attendees or speakers. We all know that white privilege is a real thing; however, it may be more beneficial to hear from different levels of privilege within the system of privilege. Once we’ve identified the fundamental problems as a system – that’s more complex than just racism or discrimination –then we can understand how to maneuver within it.

JP: Yes, I’m glad we changed it. Now we have a white man, a white woman, and a South Asian male CEO on that panel. They represent groups that have privilege in the tech industry and their privilege differs. It’s been really interesting talking through privilege with all of our speakers and witnessing them reflect on their own privilege, too. And I appreciate that you and I can talk about our different experiences openly. I’ve become more aware of my privilege as an Asian.

AM: So, what do you think success for this Diversity and Inclusion series looks like to you?

JP: That people leave with a bunch of new insights and “a-ha’s” that they want to share with others, and the speakers’ stories inspire them to have the courage to think about their own assumptions and share their own stories. In tech, we talk about learning from our failures and mistakes all the time. But people seldom want to talk about their “mistakes” when it comes to making wrong assumptions. I remember being introduced through email to a pair of startup entrepreneurs. When I went to go meet them at a cafe, I looked around and I looked right past a pair of middle-aged African American men because I just didn’t think that they could be the tech startup entrepreneurs I was supposed to be meeting until one of them came up to me. I feel good that I could share that story with you and knew you wouldn’t judge me for my original wrong assumption.

AM: Yes! The same goes for me. I wasn’t embarrassed to tell you that story of how I recently referred to an Asian American guy as “Chinese” to another friend and then caught myself and apologized because I didn’t actually know if that Asian American guy was Chinese. Success to me looks like people going back to their companies and challenging the status quo. I hope to see people inspired to be intentional after the event. I would love to see new friendships forged, similar to yours and mine. This journey has already inspired us to learn more about each other. Post event, I’d love to hear of stories similar to the one I’m now able to share about you giving me the tour of the International District, showing me your “hood,” and giving me the opportunity to learn more about Asian culture. That made an impression on me and created more curiosity and eagerness to learn more about Vietnamese culture and generally broaden my perspective of different cultures.

JP: Oh, yes, the friendships. I’m definitely grateful to Seattle Startup Week for our friendship that came out of it.

Check out these talks:

Hiring Diverse Talent from Apprenticeship/Internship Programs for your Startup