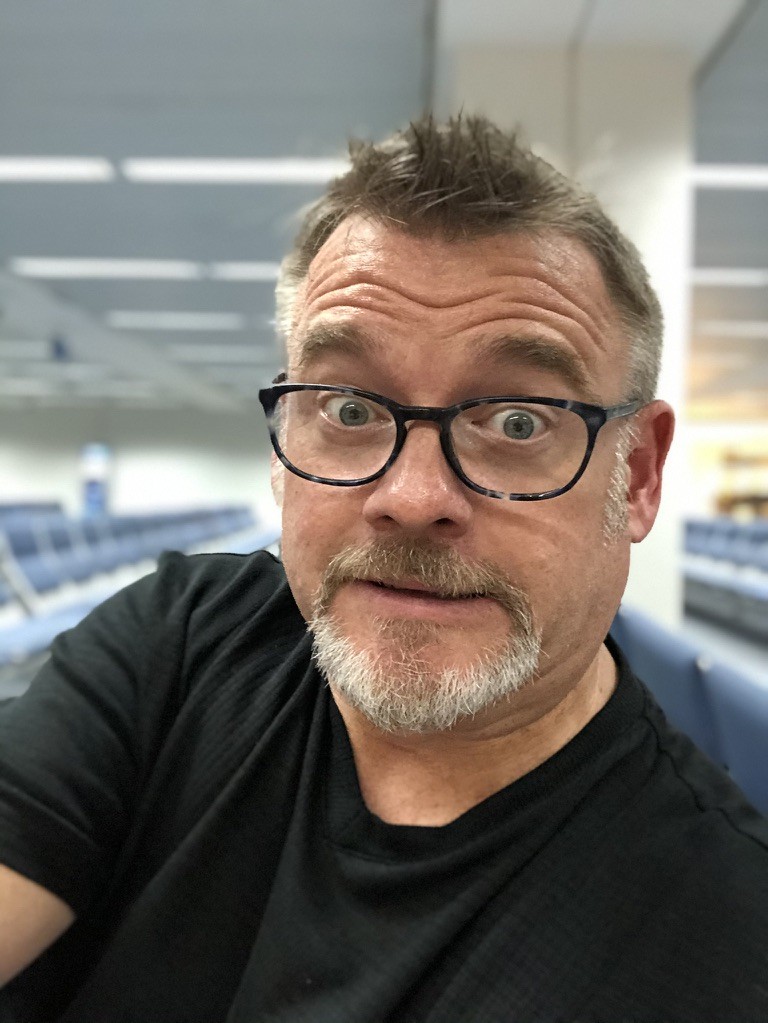 I have been fortunate to travel to some amazing places in my life. I never take it for granted. I grew up in a small town and didn’t get on a plane until I was 20.

(Edited to correct the hashtag)

What I love about working with founders is that the defy amazing odds and take incredible risks to make their dreams into reality. That’s why I support them, it’s why I travel to meet them and it’s why I always feel like I’m with my tribe when I’m with them. So when I was asked to come to a bootcamp with the 6 Month Startup content in Beirut my answer was yes!

I’ve done work with Flat6 Labs in Cairo and Bahrain before. It’s a great organization helping founders in the Middle East that I met through the Global Accelerator Network (GAN.co) as a mentor.

I did the first two days of the program exactly as planned. On the evening of the second day, I received this photo from the Managing Director, Fawzi.

He probably knew better than I that it was a soft warning of what was to come.

The final day of the three-day program had about 25% of the participants make it into the office. I was only a 15-minute walk away from my hotel, I even took some photos of smoldering dumpsters on my way there. We did pitch prep and got the teams ready for selection committee, some folks live streamed into the session.

The local team and I decided that it would be best to catch a new dirct flight the next day. We thought it was better to leave in the daytime vs at night. And that’s what I told my wife I was doing, oops.

The protests were touched off by a new tax that was levied on WhatsApp usage. More details here. Like all complex stories, it’s not just about that tax. 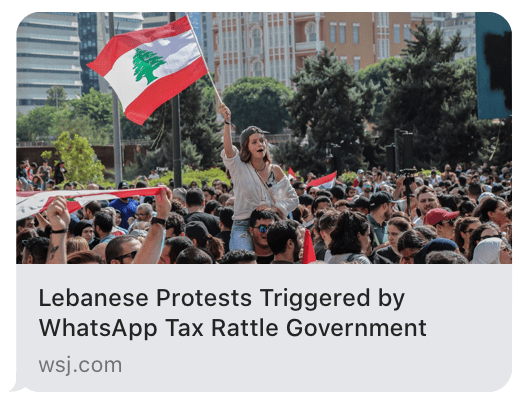 After hearing back from the travel agent, we had bad news, this one flight was part of a seven leg ticket, so if I missed this leg, all of the remaining flights would be canceled. We discussed the options and decided it would be best to leave at 7 PM, even though we heard the airport access had been closed off and on.

Here’s where the story gets fun. The office is next to the Muslim district a few blocks away from what was the Green Line, the border between the east and west districts during the civil war. it’s the home of the new Digital District that brings jobs (and gentrification) to the slums of the district. So the team at Flat6 Beirut has built great relationships with their neighbors. In fact, we had a ton of extra sandwiches from the event earlier in the day because 75% of the show up. I was complimenting Giovanni (Gio) about taking the food to the neighborhood and chatting it up with the guys on the corner, now I wish I had a photo.

Gio called some friends from the neighbor “hood” and found a very non-uber driver named Ayman. We’re talking badass. I’m going to get a photo of his phone’s locked screen, but trust me, balaclava, fatigues, AK-47 6’+, did I mention badass.

Let me say this to start – I was never in danger – the people of Beirut are amazing and they want change in their government that doesn’t serve them well. No one threatened me in anyway and I was way less stressed than the local team. OK, with that said…

We come to the first blocked street, dumpsters turned over, smoldering fire, dudes with bandanas across their faces. He shakes a hand, waves toward the front of the car, they move a barrel and we drive through. 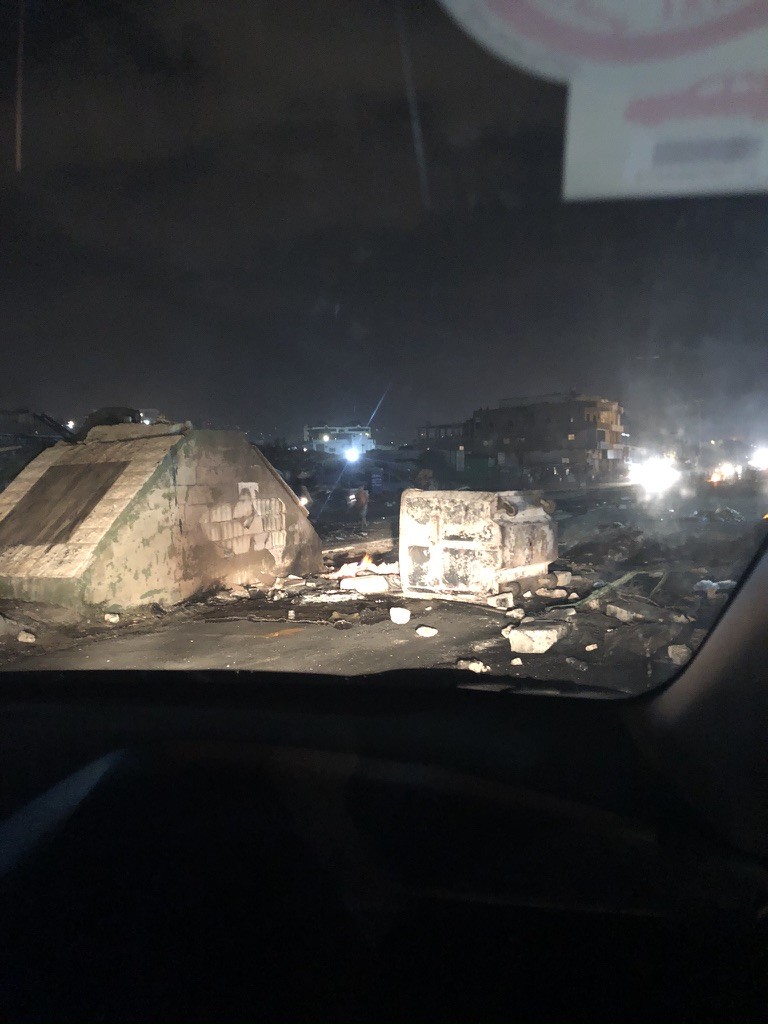 Then he drives through some twisty side roads, down the wrong way down another street, I’m totally turned around, but he pushes on. Next some more blocked streets, he talks his way through again.

The third time, there is no talking our (technically I didn’t do anything or say a word) way through, so he turns around and drives the wrong way up the highway, four-way flashers going and flashing high beams at comes coming our way that is going to have to turn around.

After some progress, we get shut down again, he crosses the median, tears something off his bumper and undercarriage. We stop and pull a of off so it doesn’t rub on bumper. Keep in mind the airport is only 5.5 miles from my hotel.

Out of the blue, he pulls over, rolls down the window and honks his horn. He calmly looks over at me and says “coffee? With or without sugar?”

He pays for two for two coffee’s and a bottle of water these guys bring to the car. And we’re off again. Two shots of espresso for me… no con panna! Damn!

We finally get to a stop he can’t talk his way through. There’s fire across both lanes of the highway, some scooters are making their way through, but that’s it. He jumps out and whistles at four people that are pulling luggage toward the fire line. One of the guys in the group is in the army, but plain closes. He’s walking his sister and mother to the airport. She received her Visa for Australia this morning and spent $2700 on a one-way flight to get out the same day she got the visa. They left their home in Tripoli at noon, it’s now 8 PM local time.

On my way through the fire line my bag gets wire stuck in the wheel, as I’m struggling to get it free a guy with a bandana says “wait, let me help”. He frees the wheel, I say “thank you” he very nicely says “you’re welcome”. As I’m going through the fire line a guy directs me to the median and on my way through to avoid the heat, I say “thank you”, he very courteously says “your welcome” – I’m thinking “how surreal is this?” 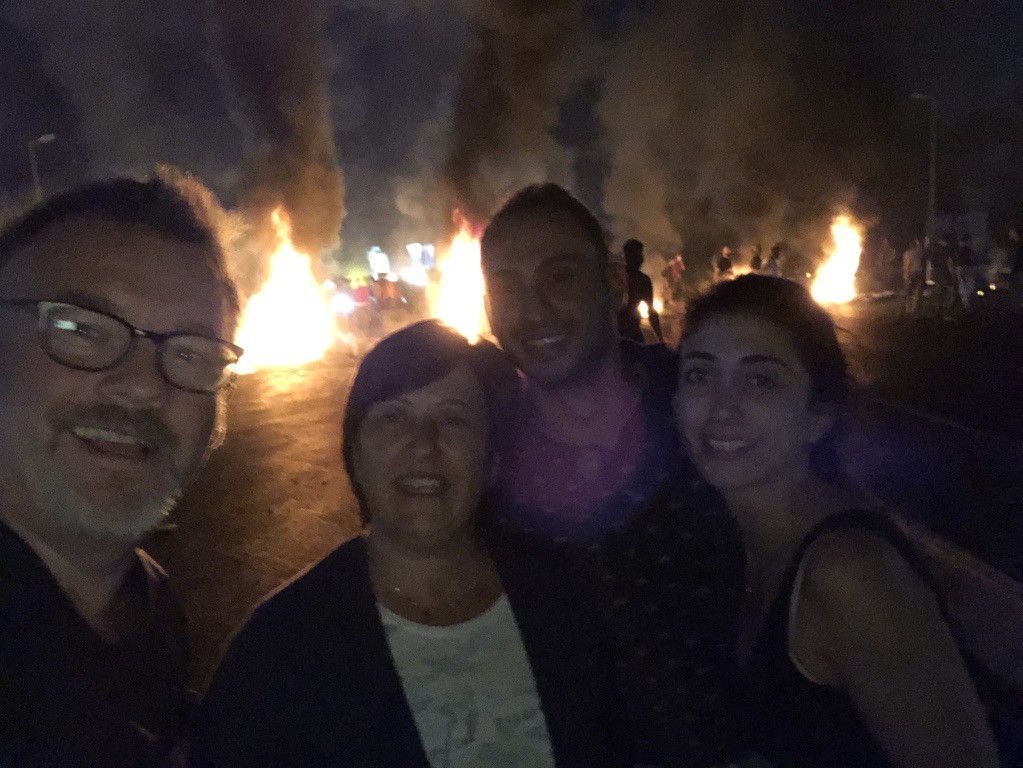 Once through the fire line, we have a 20-minute walk to the airport on the highway, but there are no cars! Yes, I turned on my apple watch to track the walk because I had no idea how far away it was from where I was dropped off. At one point we pass an army vehicle and the guy with me waves – the guy at the machine gun laughingly says thanks for coming to Lebanon, we hope you come back soon. 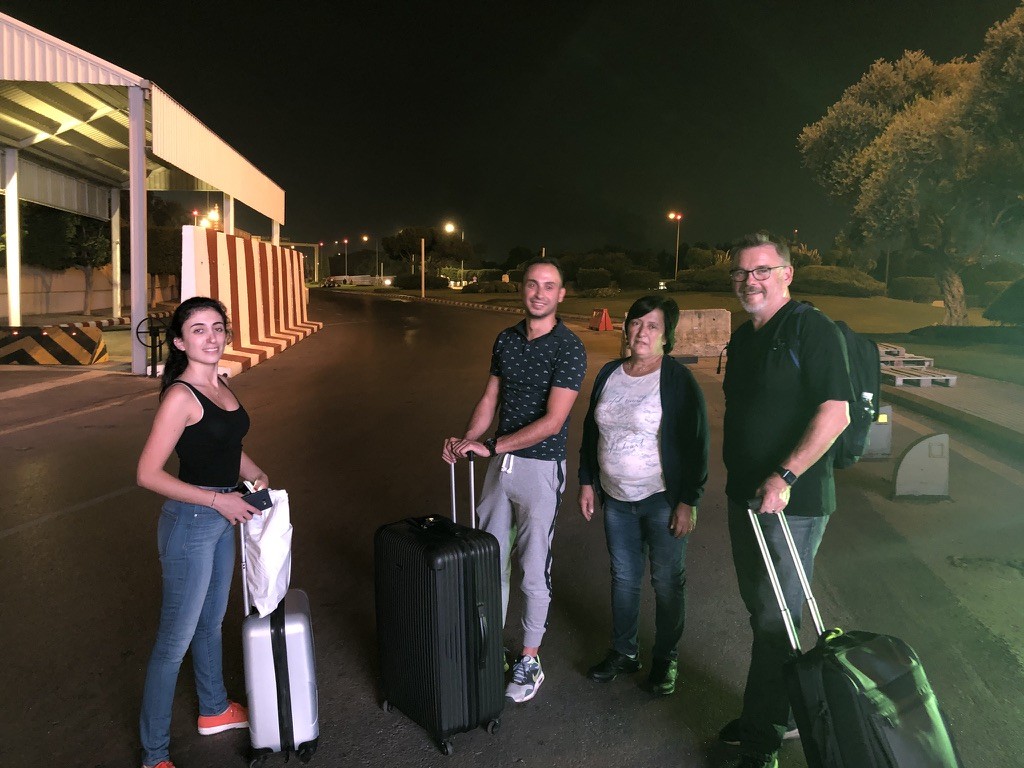 With that, I’m through security and off to the Amex lounge. I think I’ll have a Jameson please!

A few notes of thanks!

By the way, Fawzi, Gio, if you invite me back, I’m happy to come! It’s truly been an adventure I’ll never forget. And there’s this breakfast place I hear I need to try!